The new study, published recently in the Journal of Alzheimer’s Disease, has produced breakthrough results uncovering a novel promising probiotic intervention for early dementia prevention. The clinical study conducted by a clinical research organization, Huma R&D Co., Ltd. in Tokyo, Japan, in collaboration with Morinaga Milk Industry Co., Ltd, is the first RCT report to show a profound cognitive enhancement benefit of the probiotic B. breve A1 in subjects with suspected MCI.

“Our findings represent an important breakthrough for MCI and dementia prevention,” says Dr. Xiao, Director of Next Generation Science Institute of Morinaga Milk, and a principal investigator of the trial. “It marks major progress in our investigation on the ability of the probiotic strain B. breve A1 to halt the cognitive decline of older adults.”

Globally, the number of people living with dementia, including Alzheimer’s disease, will increase from 50 million in 2018 to 152 million in 2050, reaching epidemic proportions. According to the Alzheimer’s Association website, it is estimated that one new patient is diagnosed with Alzheimer’s disease every 65 seconds (https://www.alz.org/alzheimers-dementia/facts-figures), causing an unprecedented burden to society.

MCI is a common problem in older adults associated with the risk of developing sporadic Alzheimer’s disease or other dementia within a few years if left untreated. Currently, no medications have proven effective for MCI. Although several trials of pharmacological treatments were thought to prevent the symptoms of MCI, the results have been disappointing. Hence, there is an urgent need to identify effective countermeasures to MCI and dementia.

Previous studies by Morinaga Milk Industry Co., Ltd. have demonstrated the potential of B. breve A1 to treat Alzheimer’s disease in a pre-clinical model and found that this probiotic strain can improve specific cognitive functions in subjects with MCI in a human clinical trial. The current study conducted on 80 healthy older adults with suspected MCI further confirmed the efficacy of B. breve A1 on cognitive improvement.

Participants randomly received either B. breve A1 or placebo by capsule for 16 weeks. At the end of the study, Repeatable Battery for the Assessment of Neuropsychological Status (RBANS) total score showed a significant 11.3-point improvement in those taking A1 compared to placebo, in particular for domain scores of immediate memory, visuospatial/constructional, and delayed memory. In addition, significant improvement of cognitive function was confirmed by another test, the Japanese version of the MCI Screen.

Dr. Xiao said, “It was exciting to see a clear and significant improvement of memory functions such as the awareness of who, when, and where. The 11.3-point improvement of RBANS total score seen after only 16 weeks of daily consumption of the probiotic B. breve A1 in healthy older adults with MCI is remarkable.”

“Our findings could signal a profound shift as to how MCI can be treated using probiotics. Future discoveries for the precise mechanisms as to how daily consumption of B. breve A1 can improve memory will open new opportunities and alternatives for not only MCI treatment but perhaps also for other CNS diseases associated with inflammation and memory impairment.”

Pioneer in bifidobacteria research, Morinaga Milk has been focusing on the study of bifidobacteria species that are naturally present in human intestines - human-residential bifidobacteria (HRB) - for over 50 years and discovered various health benefits of its HRB strains. To continue exploring the potential of its HRB strains, in recent years, the company has focused on the gut-brain connection - a rapidly growing area of probiotics research - and conducted various research on cognitive improvement.

Embracing a significant milestone, Morinaga Milk is delighted to have uncovered the beneficial effects of its proprietary probiotic B. breve A1 on memory improvement. B. breve A1 originating from newborn infants’ intestines is the first human-residential bifidobacteria (HRB) strain that shows great promise to improve the memory of older adults with MCI and support healthy cognitive ageing.

“This breakthrough study is yet another indication of our continuous efforts to add value to our premium line of HRB probiotic strains,” said Ko Shiino, General Manager of Sales and Marketing Department, International Division of Morinaga Milk. “This promising finding will open up new business opportunities and is potentially game-changing. We are excited about the potential implications of B. breve A1 as a novel practical approach to promote healthy ageing.”

Morinaga Milk Industry Co., Ltd. is one of the leading dairy product companies in Japan with a century of history harnessing the nutritional properties of dairy products and its functional ingredients. Morinaga Milk excels in innovative technology and offers various dairy products and other beneficial functional ingredients to customers throughout the world. Since the 1960s, Morinaga Milk has been engaged in research on the safety, functional health benefits, and mechanisms of action of probiotic bifidobacteria to better understand their role in maintaining human health. For more information about Morinaga Bifidobacteria, please visit us at http://bb536.jp/english/index.html 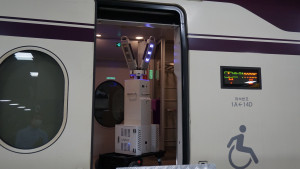